So, this week, panic hoarding at Costco stores and other big-box retailers got a little more serious when it started on Thursday. Mostly because confirmed Covid-19 cases and deaths are surging across the country, as many fear, increasing coronavirus test kits made available to the public would reveal the true extent of the outbreak. Mass gatherings in many states are starting to be limited, education systems are closing down, and the federal government is now starting to enforce social distancing policies for all citizens, this all suggests, that an Italy-style lockdown could be on the horizon.

Anxieties are increasing this week as brawls have been reported at several big-box retailers. It was unclear what customers were fighting about.

Here’s footage on Thursday of a fight between two customers at a Brooklyn Costco.

A Sam’s Club customer on Thursday was stabbed with a wine bottle over a pack of water in Hiram, Georgia.

BREAKING: A man was stabbed with a wine bottle over a pack of water at a Sam’s Club in Hiram. 😳😳😳😳pic.twitter.com/KV5X7MiKpO

Local police at a Costco in Lynnwood, Washington, were keeping order on Saturday as hundreds of customers wrapped around the building, due to new social distancing policies that only allowed a certain amount of people in the store at one given time.

Went to my local @Costco in Lynnwood, WA and saw this. Local police are present and crowd control policies in place. Long line of people and limiting entry to make sure social distancing is followed. Apparently yesterday was a nightmare. pic.twitter.com/D44ZpChdQy

A longline developed outside the Ann Arbor, Michigan Costco on Saturday.

Now, this is crazy, a huge line extending down a street of people trying to get into La Habra, California Costco.

I have to go to the restroom someone please hold my place in line #costco #lahabra #coronavirus video by lawdog_430 ig pic.twitter.com/bxFqmv3Xq5

At an undisclosed Costco, apparently all the chicken is gone.

Shelves are bare at a Walmart.

Seriously people, slow down and think.

This is not like a hurricane in a 3rd world country where delivery routes are cut off for months.

The longest you’d be quarantined would be 2 weeks — you don’t need to buy out Walmart & Costco to survive in your home for two weeks pic.twitter.com/6AEizbJYhC

A Target in Cincinnati, Ohio, limited customers to products on Saturday morning.

Toilet paper supply at a Cincinnati, Ohio was out on Friday evening.

All the fruit is gone at a supermarket in New Jersey around 5 pm Saturday. 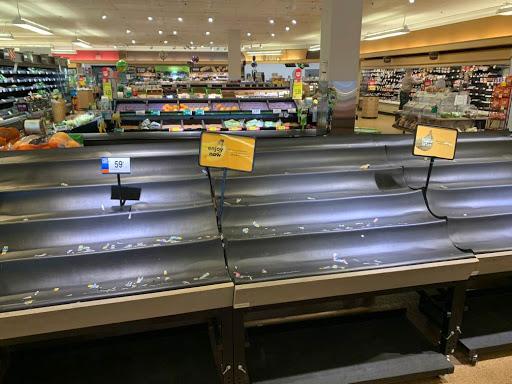